Does this Autumn chill in the air have you starting up knitting projects? Perhaps it has you starting to pursue what sock yarn to buy next?

Look no further. I have the next sock yarn you should buy right here.

The first thing I want to point out is that I was expecting the bare minimum in packaging.  But Rachel goes above and beyond. Not only does she dye beautiful colorways, but she also sends the yarn of the month with a lavender sachet and a witch hat charm. Well, when the theme is Harry Potter, anyway.

The thing that threw me over the top and caused me to smile like any good Harry Potter nerd would is the stitch marker.  It’s a bronzed witch hat! I was expecting sock yarn and received much more. So, Rachel, the packaging gets a thumbs up in my book.

I know you are all here for the yarn. So I will stop geeking out about the other stuff. But really a witch hat, and a lavender sachet? Who else does that?

Okay. Okay. Really on to the yarn.

The yarn is Rachels well known Barn Owl Base. It’s soft, comfortable to knit, and feels excellent as a finished sock. I have used Barn Owl Base yarns for at least four pairs of socks. 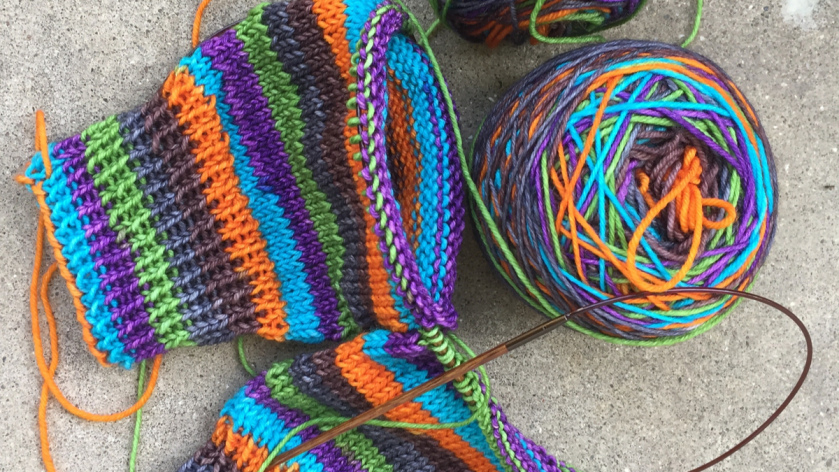 Barn Owl base is a plump sturdy yarn that is 75% Merino and 25% Nylon.  It is super soft and warm wool.

Self Striping yarn is the best if you want to be able to knit, and not have to think about how the stripes work out.  I love fancy sock patterns, but I have realized this busy season is not the time to try patterns that I have to think about knitting up.

Rachel was inspired to dye this yarn after her trip to Universal Studios in the Fall of 2018. She immediately noticed the dark greys and browns that made the majority of the background. But when really studying the environment, the pops of color bring an air of excitement.

I love this yarn so much. I really didn’t want to stop knitting until the project was finished. I used Mina Philips, the Knitting Expats Vanilla Sock Recipe. Between the ease of her knitting recipe for double knitting socks and the self-striping yarn, this knit was a dream of knitting ease.

A friend pointed out that the colorway matched my Cady girls’ pants. Shh, yes, I let my daughter go to the park in pajamas. It was a weird interim between Summer and Fall clothing swaps. We really just needed to get out of the house. They play I knit. It is a win, win situation.

Rachel, I look forward to seeing what the next color of the month will be. Your creativity and dying skills are a lot of fun to see.

Check out Rachel’s work over at Night Owl Fibers. Buy your Diagon Alley sock yarn before it’s too late. If you are too late don’t worry next month’s Harry Potter Yarn club promises to be a keeper.

I am a knitting designer, a freelance writer, and a fiber lover. View all posts by Life Adventures Stories Written In Yarn.